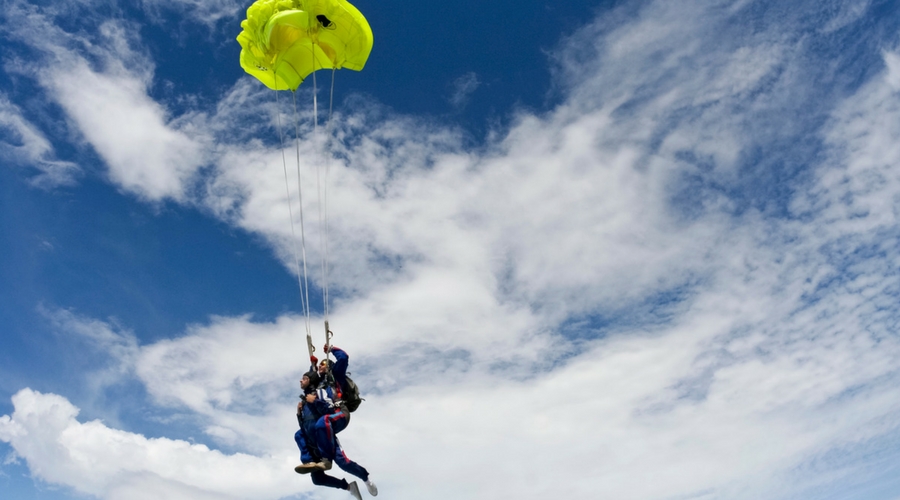 "I'm afraid of heights. Should I skydive?"

Wow, do we hear this a lot.

Interestingly, there are usually two distinct groups of people who tend to ask us this question, and we'd like to address both of 'em:

Both of these groups are coming at the question from a different angle, and both perspectives beg equally for a closer look.

Our Group 1 friends are fantastic people who are a little (sometimes a lot) lacking in the department of self-confidence. They usually talk about how they're going to be "freaking out so much that they won't be able to get out the door" or that they'll somehow end up passing out immediately upon exiting the aircraft. They usually end up bathing the whole prediction in negative self-talk ("I'm so [negative quality];" "I'm not [positive quality] enough") and fatalism ("I could never do it;" "I always wuss out"; "I'm just not the kind of person who can do something like that.")

Here's the thing: You are the kind of person who can challenge your fears. You can conquer anything you put your mind too. You're much more powerful than you think you are, and skydiving is a great forum in which to prove that to yourself.

A word to the wise: Once you land, you'll have far fewer excuses not to chase your dreams, so you might want to plan for that meteoric rise. Just sayin'.

Group 2: Skydiving Will Cure My Fear Of Heights

This is a super-interesting idea, and we heartily applaud such an enterprising approach to the matter. Choosing to literally leap right into something that's holding you back? Wow. We salute you.

That said: using skydiving to cure acrophobia doesn't actually work, even though it absolutely seems like it would. The issue is that skydiving doesn't trip the same switches that kick in the acrophobic's stone-cold-classic dizzy feeling. Standing in the door of a plane just isn't the same as, say, standing at the rail of a bridge, or standing at the top of a ladder. Since the view is much more like looking down at a flat map of the world, your brain doesn't send the same signals to your body--and when you jump, there's no sensation of falling.

That said: you can use skydiving to build confidence. You can use it to teach yourself to react calmly and proactively in the face of stress. You can use it to train breathing exercises, to minimize your panic responses and to reframe what you're capable of as a human being. Any and all of the above will, no doubt, give you a powerful set of tools to use for the next time you're squaring up a bungee jump. Right?

So: Should You Skydive If You Have A Fear of Heights?

Unequivocally, yes. You have everything to gain from taking on the challenge. Do yourself a favor and jump. You'll see just how strong your mettle truly is--and you'll be delighted.

What are you waiting for? Book your jump today!

Definitely go if you get a chance. They are wonderful to work with!