"When once you have tasted flight, you will forever walk the earth with your eyes turned skyward, for there you have been, and there you will always long to return."

The heavens have always fascinated our gravity-bound monkey minds. The very earliest of our species checked out the stars with rapt interest and from there, humankind's story has been inextricably wrapped up in our tireless pursuit of the firmament for all kinds of purposes -- among them, of course, skydiving. Skydiving drives our very lives over here at Ozarks Skydive Center, and we wouldn't have it any other way -- and we wouldn't have a sport to love if it weren't for the daredevils and innovators who came before. Want to hear a story? Curl on up.

The history seems to inscribe a classic case of "multiple discovery" also known as "simultaneous invention", which means the hypothesis that most scientific discoveries and inventions are made independently and more or less simultaneously by multiple scientists and inventors.

Some 12-century Chinese written history describes parachute use for stunt performances -- and technically for BASE jumping (defined as jumping off a fixed object as opposed to an aircraft). The Chinese also apparently invented the umbrella, so it appears they extended the design a bit for this purpose -- certainly not the best design, but a recognizable early one.

The first European parachute appears to be a conical version by Italian architect Francesco di Giorgio Martini, which shows up in the history books around 1470. Leonardo da Vinci (from whom we get the classic quote from the beginning of this article) later used di Giorgio's model when he began to develop his own version.

Since one needs air power to do this properly, Frenchman Andre-Jacques Garnerin might be the first person to make an actual skydive. In fin de siècle France (and, indeed, all over the world), a fad for ballooning was filling the skies with colorful dirigibles, and keen stuntpersons decided to take it to the next level by abandoning their fabric whips to descend under questionable parachute designs. Garnerin did just that, rigging his balloon to deploy his parachute when he jumped out.

A woman was first to get actual freefall time: Tiny Broadwick, an air show performer with one heck of a life story, in 1913 over Los Angeles.

From Awe to Shock

Clearly, parachuting isn't simply useful for a showy diversion. The militaries of the world soon realized parachuting was an effective means of getting behind enemy lines to deliver supplies and soldiers -- and so the technology developed wickedly quickly with the onset of WWI and WWII. New designs emerged, and soldiers trained by the hundreds to use them.

After treaties were signed, lots of those soldiers weren't ready or willing to give up the freedom and rush they felt from skydiving. They modified military equipment and joined up with skydiving clubs around the country -- at first, just a few, then more and more. By the 1980s, steerable, square parachutes were starting to become a normal part of skydiving life. By the next decade, tandem skydiving and automatic activation devices were changing the face of our sport immeasurably, making it safer and more accessible than ever before.

Do you want to be a part of the ever-evolving history of skydiving? You should make your mark by booking your tandem jump with Ozark Skydive Center today! 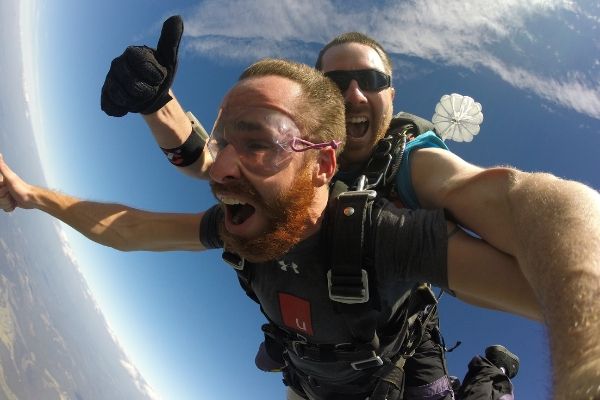 Definitely go if you get a chance. They are wonderful to work with!